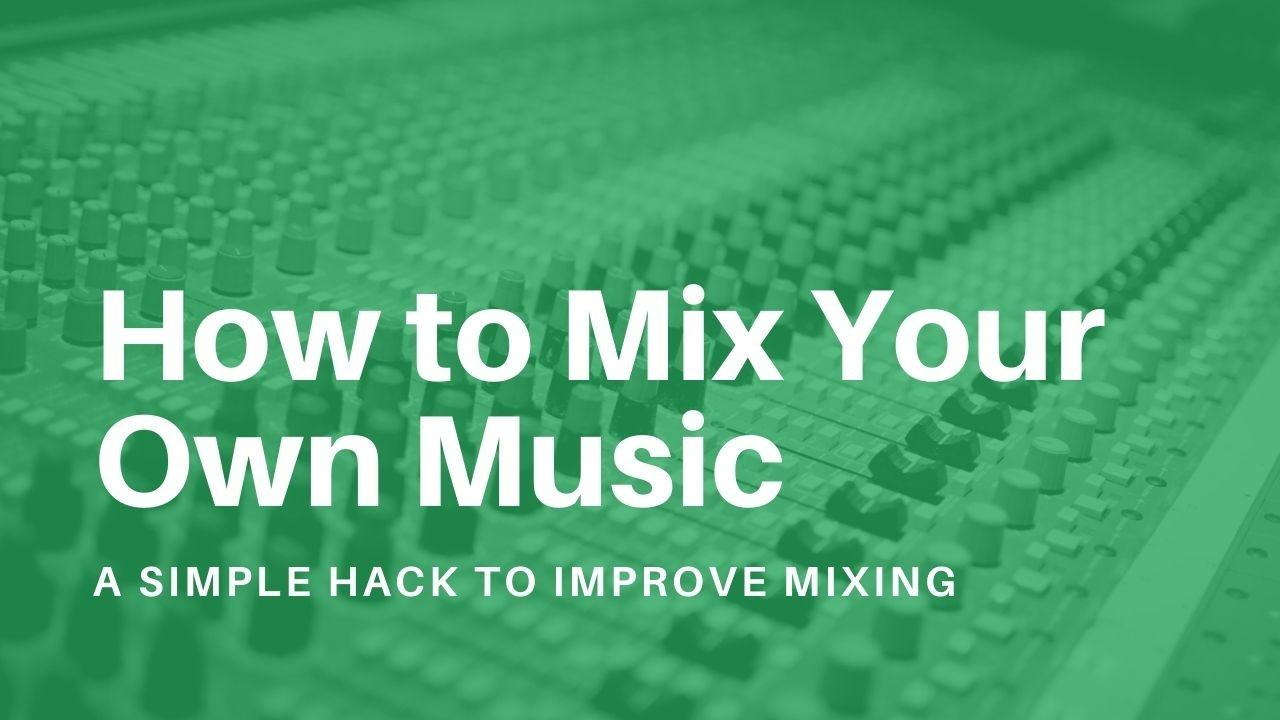 Everyone wants better mixes, but struggles with mixing music. Learning how to mix your own music is really challenging.

Better mixes take a lot of it skill, and learning how to mix music is a lifelong undertaking.

Some plugins and gear can help.

And more knowledge about how to mix music always help.

But the secret sauce to good mixing is process!

That’s right – you can have all the tips, tricks, gear, and plugins, but if your workflow sucks, your music mixes probably will too.

Sure, everyone is going to mix differently, with a different process. Some people like to use effects on the master bus. Some prefer to start mixing in mono (which you should definitely do at some point in your mix)!

Sometimes the choice of workflow is determined by the type of some you’re working on. For example, if a singer is really the star of the show, you may need to get her voice right first, before moving on. If it’s an EDM or Hip Hop song, you may need to start with the drums.

And of course, some DAWs lead themselves to different workflows. Whether it’s through templates or just what comes easiest.

But what I’m about to show you isn’t about technique.

No, this simple hack for drastically to drastically improve mixing music involves changing your mindset.

It’s totally free, and it doesn’t take much practice. But it does take discipline and commitment.

So, without further ado….

The Simple Hack for How to Mix Your Own Music

In other words, I learned how to mix my own music by really pretending that I was mixing someone else's music.

This led to two major gains for my mixing.

First, studios usually charge customers by the hour. Because I used to act like I had all the time in the world, I wasted countless hours going down rabbit holes. When I changed my mindset, and acted like I was paying for time in my own studio,I stopped endlessly twiddling with knobs.

Instead, I focused ruthlessly on big wins.

My mixes have gotten bigger, punchier, and more dynamic, all without a single new plugin.

And that’s because I’ve gotten so much better at EQ and Compression by not getting distracted by the rabbit hole of endless effects.

That’s right, mixing music is most improved by focusing on the core of the song, which frees up your mental energy to really dig into the important stuff.

It doesn’t mean I don’t still use effects, but I don’t use them to hide things, I use them to enhance my mix.

It also means that I don’t hit record until I’m ready to play all of the parts. This means I’ve practiced (and written) most of the song beforehand.

I’m still able to capture happy accidents that always occur in recording, and I still leave time for adding musical embellishments. But I focus in on getting the song fully recorded in one go. You’ll find your performances to have a much better groove if you can record everything in a short span, because you’re playing from the same headspace.

The second big win gain from re-framing my perspective on my home studio is that it’s taken away the mental ceiling from my mixing. I’m not just mixing demos in my home studio, anymore.

Now, I honestly believe that I can make professional sounding recordings (at home).

I’m not saying that I know how to do it yet. But I see the limit as me, not my situation.

And through practice and learning, I know I can improve myself. This mental breakthrough was related to what I discussed here.

So how do you implement this simple, free hack for mixing your own music?

Well the next time you’re working on a song, take five minutes at the beginning and plan out your recording schedule.

For example, your recording & mixing schedule could look like this:

Day 3 – Nothing. Ignore the song completely… wait, what song????

Day 4 – 1 hour of final mixing and listening on different speakers, then 2 hours mastering (if you do it in house).

Use a clock to track your time. Hold yourself accountable. You’ll quickly be forced to focus in on core of your song & mix, and you’ll ultimately improve your core skills!

Good luck with! I’d love to know if anyone else uses this trick, or if this hack works for you!