How to Setup Kontakt Multi-Output In Reason 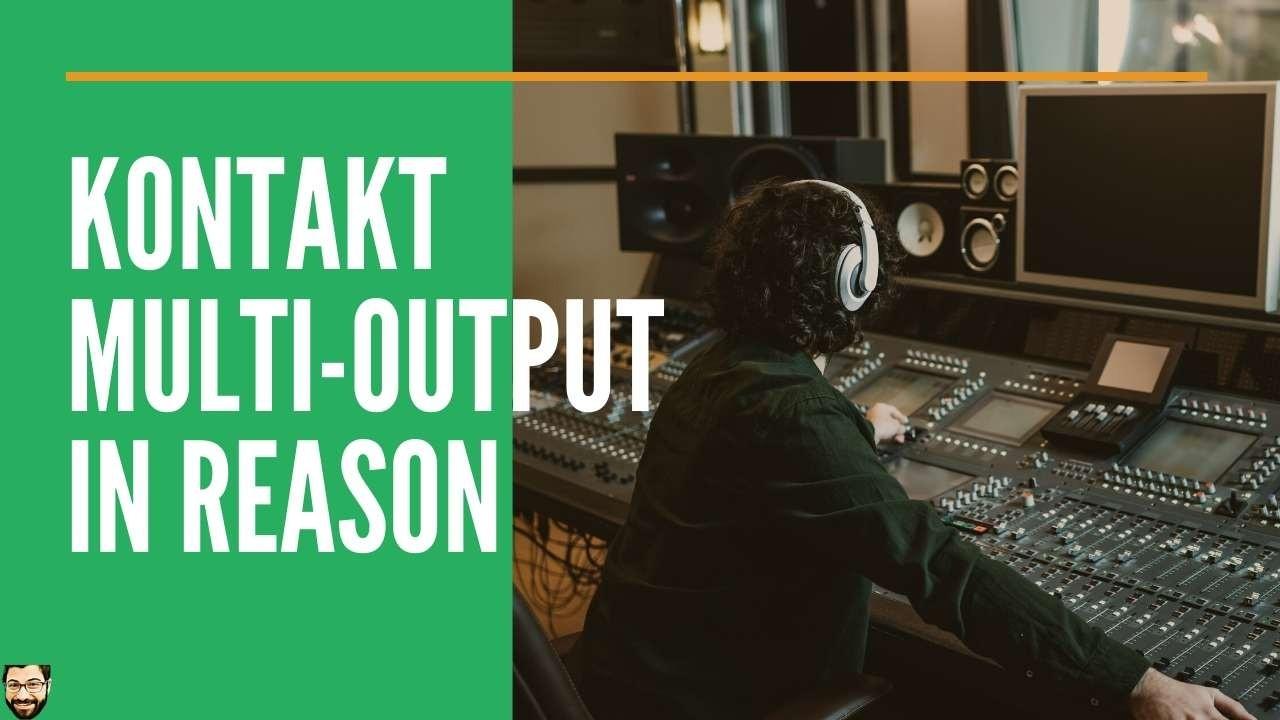 Kontakt is an incredibly powerful tool for creating lifelike music, and to fully unleash it's power, you need to start using it in multi-output mode. Because once you learn how to setup Kontakt multi-output in Reason, you'll be able to save a lot of CPU resources and improve performance by needing fewer instances of Kontakt.

Just follow the simple steps laid out in this video, and you'll be layering multiple instruments in Kontakt like a pro. And layering is one of the keys to creating lush, rich mixes.

To create multiple mix channels, simply right click on any blank space on the Reason Rack and select "create new mix channel." For every layer that you want to separately, you'll need a new mix channel.

For example, if you're setting up a three piece orchestra, you could label the channels "Violin," "Cello," and "Bass." Then you'll want to hit the tab key in the rack view. On the Kontakt rack unit, click the little button next to the the phrase "CV Programmer" to expand the Kontakt rack. 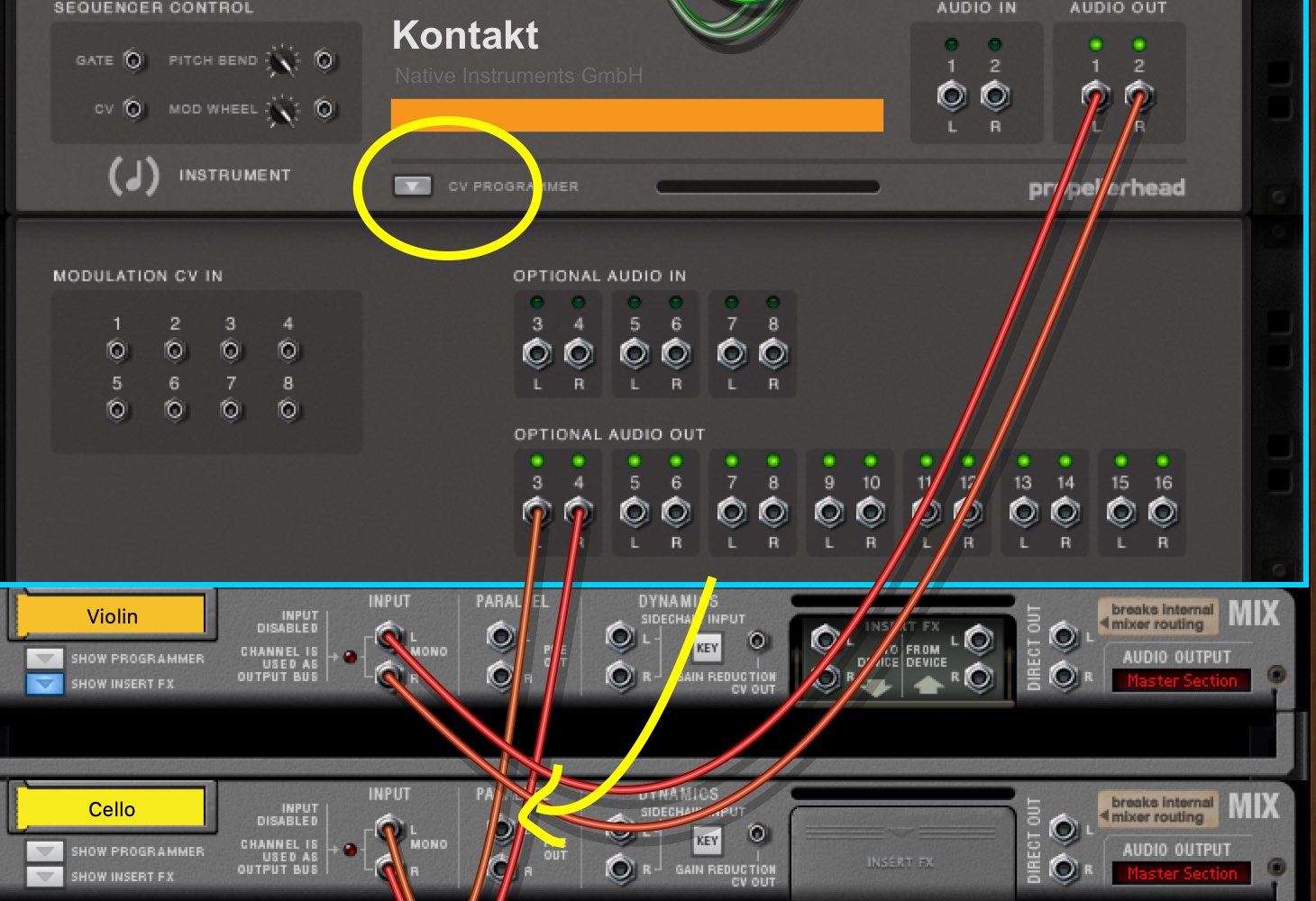 Then click to drag cables from Audio Out 1-2 (at the very top of Kontakt) to the Violin mix channel. And then from Audio out 3-4 (in the expanded view) to Cello. Repeat with the bass. 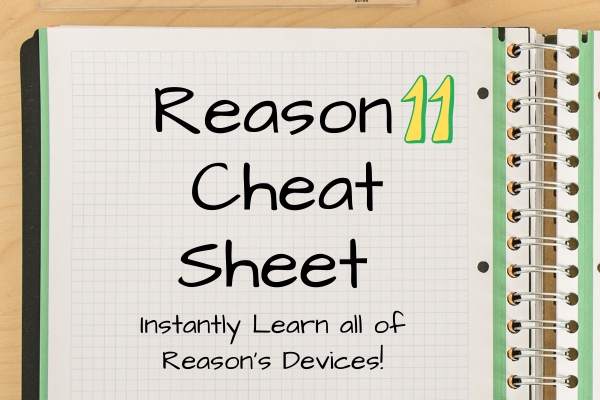 Setting the Output of Each Kontakt Channel

Next, you need to setup each instrument in Kontakt to send its output to its own Reason mix channel. To do this in Kontakt, click on the icon in the top right that has 3 rectangles, and click to make sure that "Outputs" view is shown.

Then, click on the "+" outputs. This will give you the option to create multiple new outputs. So, in this orchestra example, you'd create two more (because you've already got one by default). Be sure that the number of channels says "2." That just means the output will be stereo. If you want your Kontakt Multi-out to be mono, change it to 1. Also be sure to select "Kt. St. 1" from the drop down menu next to Soundcard/Host Output. Finally, select "ascending output assignment" to have Kontakt automatically route the sound to the next numbered output. 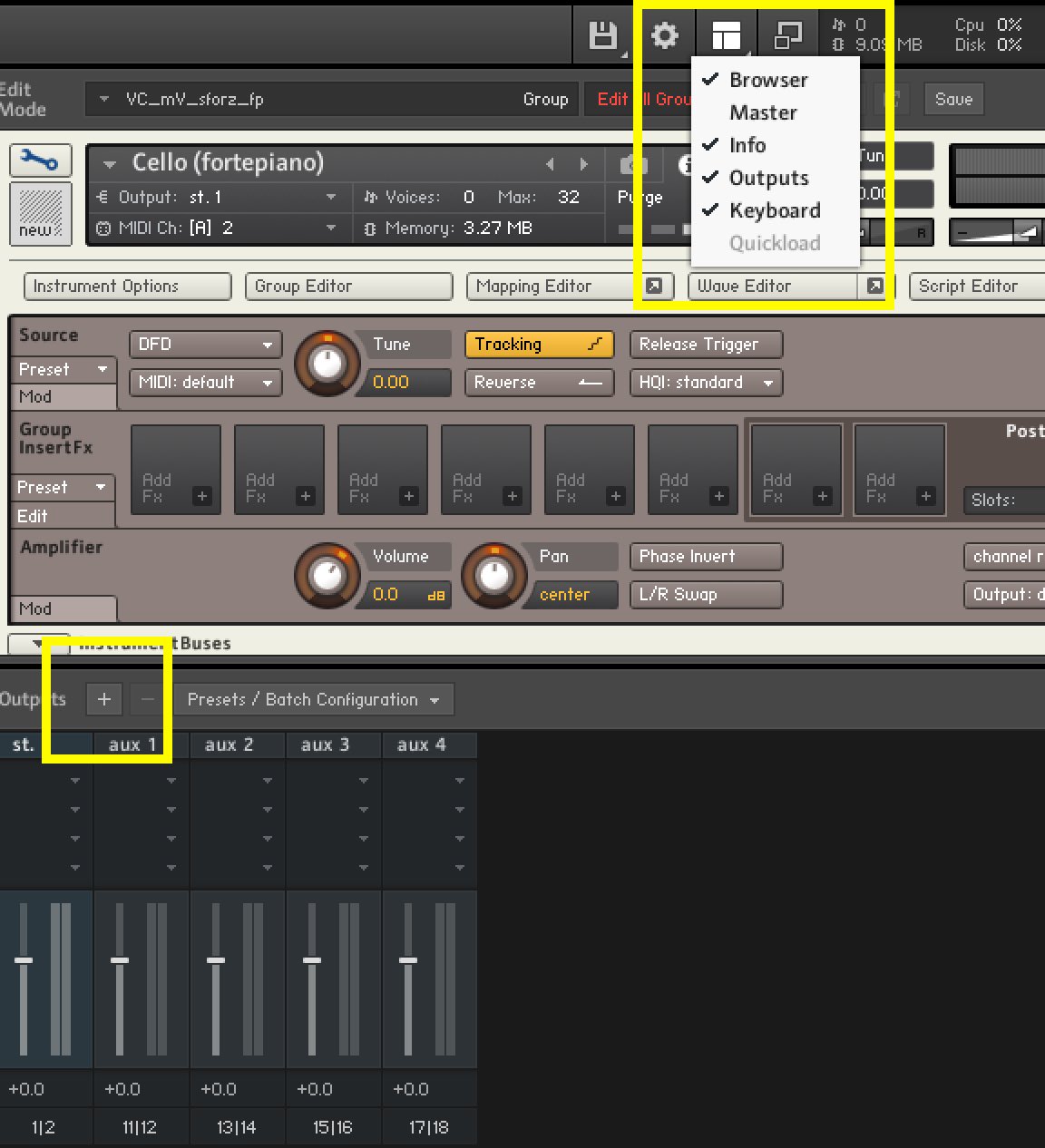 Next, you need to assign each instrument to its own output in Kontakt. Look at the top of each Kontakt instrument. You should see something that says "Output." Click the drop down menu and assign it to the appropriate output. In our example, you wouldn't do anything to the violin channel, because it's already going through the main outputs. You'd assign the cello to St. 2 and the bass to St. 3.

Setting Up the Midi Channels to Control the Different Instruments

Next to every instrument, right below the "output" menu you just used, you'll see a menu that says "MIDI Ch." In Reason, you need to assign EVERY instrument to MIDI channel 1. This is one major downside to using Kontakt multi-outputs in Reason:  every instrument within Kontakt has to be assigned to the same midi channel, because Reason only has one internal midi channel.

While it seems like every Kontakt instrument would have to play the same notes and rhythms, if you watch the last part of the video on this page, I show you a few work arounds to get complex layers.

While setting up multiple Kontakt outputs in Reason seems confusing, it's really straightforward once you get the hang of it. The only downside is that Reason only has one MIDI channel, so you're limited by what you're able to achieve with a single instance on Kontakt.