How to Write a Song: Intros 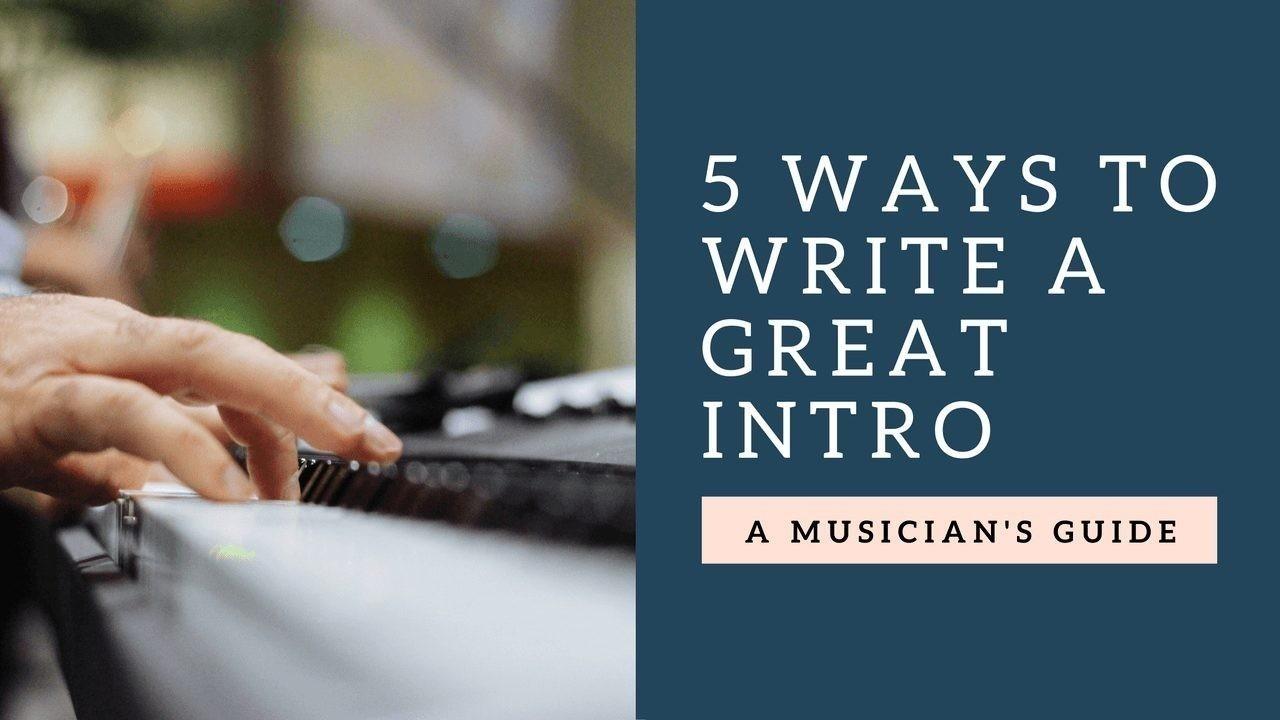 If you want to learn how to write a song, the first thing you’ll need is a *strong* intro. As the saying goes, “you never get a second chance to make a first impression,” and that’s as true in song writing as it is in anything else. In fact, as I’ve said in my tips for tips to write a song that sells, having a strong intro is one of the major factors in success.

This is one of the key things I reveal in this free video on how to license music.

Just think about it. People’s attention spans are getting shorter and shorter. There’s literally 1000’s of songs being uploaded every day. If people don’t like what they hear in the first few seconds, they may not wait around until the better parts of your songs.

That’s why you’ve got to learn how to write an intro to your songs.

Now I’m going to give you guys a template with 5 different styles of intro you can use for writing that killer intro.

These techniques have gotten my songs placed on NPR and on National TV, among other spots.

Are you ready to learn how to write a song that instantly grabs your listener’s attention?

Great! But before we go further, I usually write the intro to the song last! Because ultimately, the intro has to fit the song, not the other way around.

This technique is great for electronic music and for hip hop. For example, you can hear Daft Punk doing this ALL of the time.

Basically, what you do is you “sample” the verse or the chorus of your song, select a little chunk of it, and then line them up together in little segments that get shorter and shorter.

Here’s how you can do it for hip hop.

And here’s an example of how you can do the Daft Punk style build up.

Using these techniques will instantly bring energy to your songs. They also work great for breakdowns, buildups, and bridges.

This style of intro involves creating an artificial soundscape that’s interesting, then slowly fading your song into it. This is great for bring the listener’s attention to the song, and much more powerful than just a straight fade in.

You can use this with almost any genre, from rock to EDM to hip hop.

Hear how the cacophony of the jungle gives way to the energy of the samba? Trust me when I say that this is 10x more powerful than just starting with the song itself. Of course, you still need to know how to write a song, but the soundscape helps place it in context.

This technique probably will require you to use some extra samples to get the ambiance right. But don’t fret – here’s a list of some of the best sites for free music samples!

This intro style probably works best with electronic music, though it also fits well with pop. Basically, you put a high pass and a low pass filter on your master bus and slowly decrease the amount of filtering as the song builds up.

You can hear an example of this (and the 1st & 2nd style, all combined!) in the song Digital Love off of Daft Punk’s Discovery

. I highly recommend listening to this album a thousand times to learn all sorts of great production tips.

Yep. That’s how you write a great intro.

How to write a song 4th Intro Style – Surprise

This 4th intro style relies on the art of surprise. Basically, you use a weird instrument or effect to kick things off, and that grabs the listener’s attention.

You can hear how this royalty free disco funk (affiliate link) song starts with a highly processed drum beat that would be annoying if played for much longer, but it’s also weird enough to be interesting. It’s yet another way how to write a song intro.

If you’ve got an energetic upbeat song, then one of the best ways to start it is by just coming in hot! Start with a huge drum fill or searing guitar solo to instantly grab your listener’s attention. You can back it off from there, but it’s a great way of putting your best foot forward, especially if you know how to write songs that can maintain a high energy level throughout, but also have dynamic verses and choruses. This is especially good for fast paced classic rock music (affiliate link).

Ready to start putting these tips into practice? Learn how to start licensing your music today!