Reason+ Review - Is Reason Studio's Subscription Worth It? 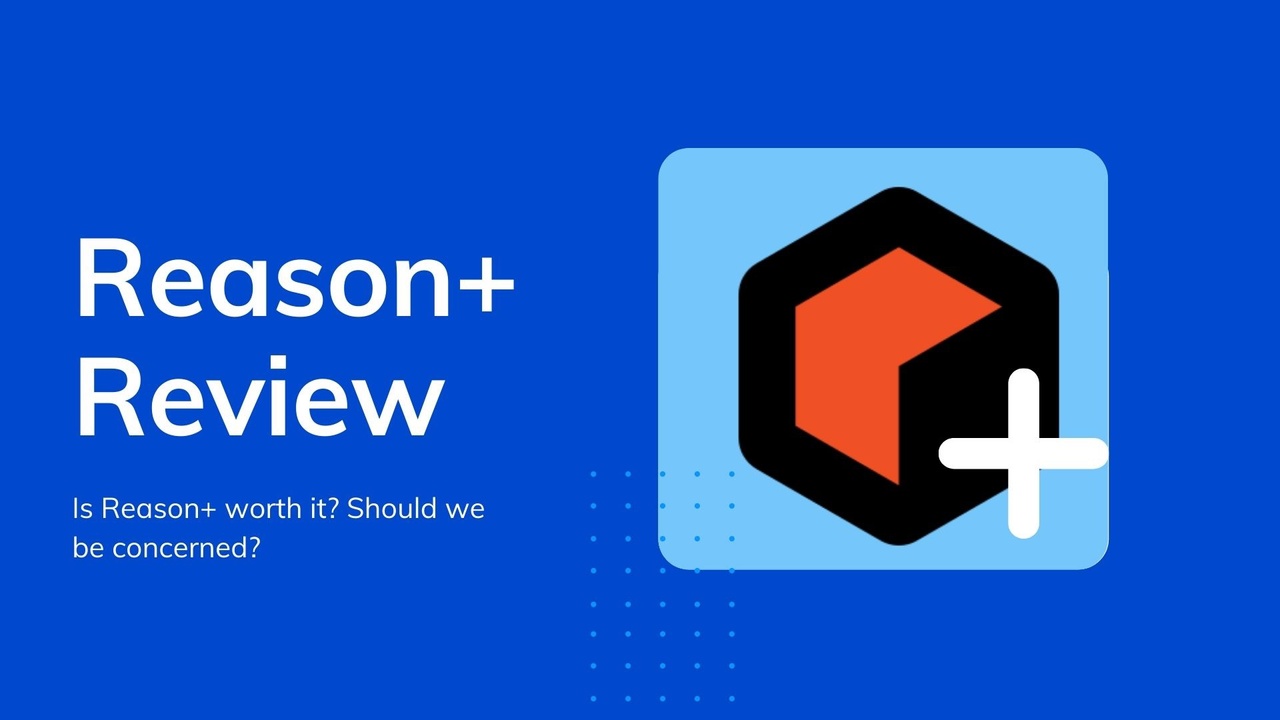 In early 2021, Reason Studios announced Reason+, a new way to gain access to the Reason DAW ecosystem. In this Reason+ review, I'm going to help you figure out if Reason+ is a good choice for you.

One thing to note is that Reason+ will be constantly evolving as new Rack Extensions and versions of Reason are released. I'll do my best to keep this review of Reason+ updated.

Note: some of the links below may be affiliate links, meaning that I receive a commission if you purchase through them.

If You're Looking to Get Started with Reason:
✅ Here is a cheat sheet for the Core Reason Devices

Reason+ is a subscription plan that provides subscribers with access to: 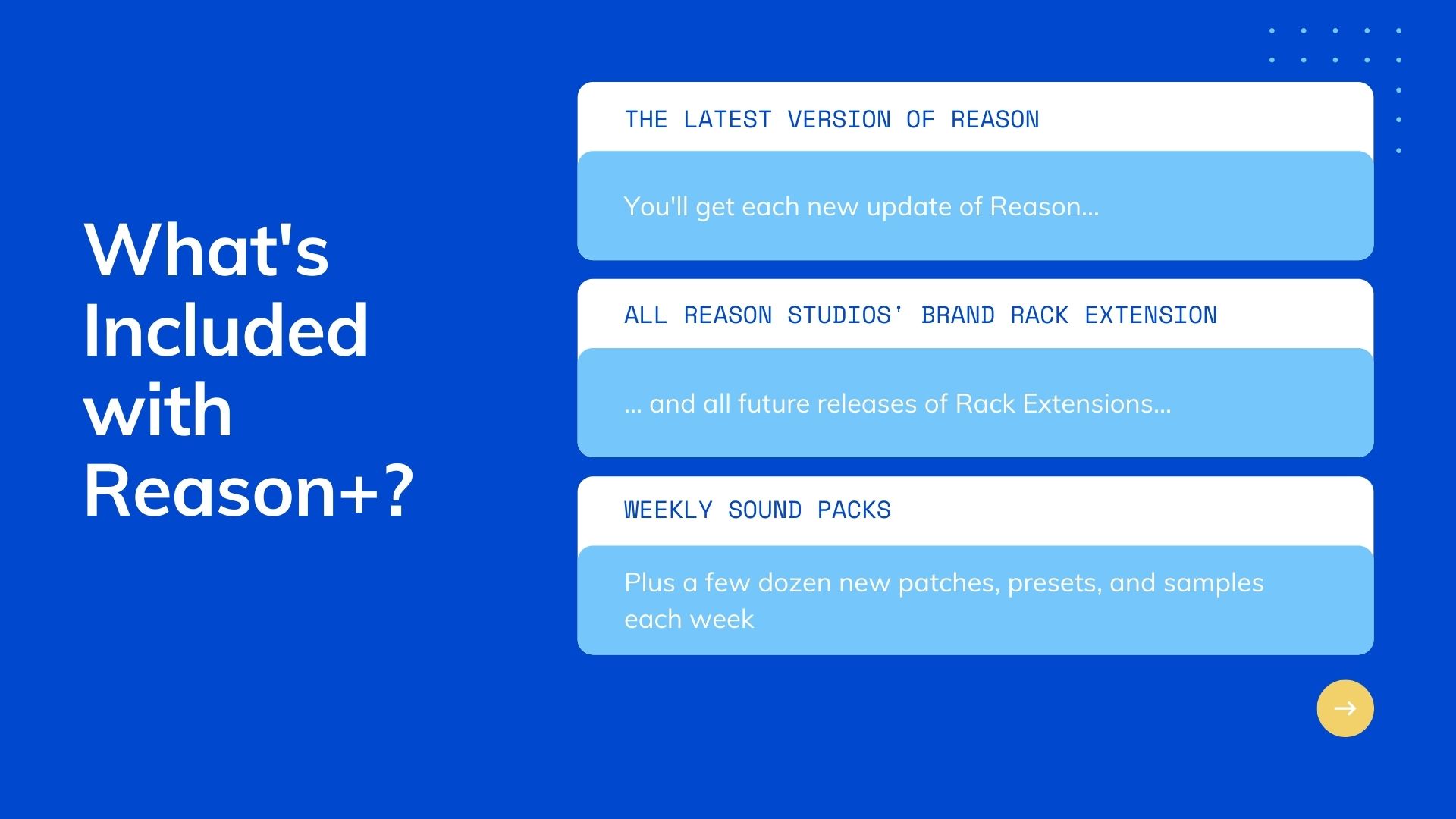 We'll talk about whether Reason+ is worth it later, but it's worth noting that if you cancel your subscription, you'll loose access to Reason and Rack Extension, but will be able to keep any of the presets and samples you've downloaded.

If you already own a full version of Reason, for example Reason 9, then you will still be able to use that license.

Reason+ promises to included the most complete, up-to-date version of Reason, at all times. Currently, that means Reason 12. And when Reason 13 is released, that will then be the version included with Reason+.

And on and on.

If You're Ready to Rock...
✅ Click here to check the price of Reason+

Is Reason a Good DAW?

I've already done a full in-depth Reason 12 review here. Reason 12 will be the core of your Reason+ experience, so it's worth thinking about whether Reason is a good DAW for you.

I've use Reason for nearly twenty years. Song I've made in Reason have been streamed hundreds of thousands of time, placed on TV Shows and Netflix Documentaries, and broadcast on NPR. So you can make good music in Reason!

I also think that Reason is probably the most fun and inspiring DAW. There's something about it that feels more like an instrument than a piece of recording software. I think that this aspect makes Reason especially well suited for guitar players or folks that are into modular synthesis.

That said, Reason's core architecture is outdated. It lacks many of the features that have long been standard among its competitors, and there is no clear indication that this will be changing.

However, you can also run Reason 12 inside of another DAW as a super-powerful instrument and effects suite. This gets you access to a ton of sounds and flexibility for a very affordable price.

When Reason 12 was first released, I gave it an 7/10. But now that it's been out for over a year and still has not seen any significant improvements (while its peer DAWs have been improving), I think the core score for Reason 12 is more like a 6/10.

However, the overall package presented with Reason+ is pretty great, when you factor in all of the instruments effects, utilities, etc. So I'd actually rate Reason+ higher than Reason, especially if you're using it as plugin.

Now that Reason+ has been out for over year, I've done an updated review to look at how that first year has played out. There's some good, some bad and some ugly. The short of it is that the value and pace of Rack Extensions is good, the weekly packs are fine (but impossible to manage), and early access and pace of DAW updates sucks.

Check out the video to learn more.

In addition to the core instruments included with Reason 12, Reason+ includes every Rack Extension released by Reason Studios, some of which are truly fantastic. I'd estimate the average cost of these Rack Extensions at $99 (some more, some less, and I'd expect the price to go up over time).

While the core Reason DAW has not significantly improved since Reason 12's release, one thing that I want to stress in this Reason+ review is that Reason Studios has released several Rack Extensions lately that are absolutely incredible.

For example, Friktion is an amazingly powerful string synthesizer that can be used across genres to create a world of incredible sounds.

And Algoritm is a best-in-class FM synthesizer.  My hope is that the need to retain subscribers will put pressure on Reason Studios to continue to release excellent Rack Extensions.

As you can see, there's a lot of good tools included with Reason+. And these Rack Extensions complement the sounds and instruments already included in Reason 12 to give you a vast palette for sound design and creativity.

Reason+ also comes with weekly mini-sound packs that include all sorts of patches for Reason instruments and effects, as well as samples. While I think the quality of these packs is fairly good, I don't personally feel like I need this much content.

Moreover, Reason+ does not provide a decent way to sort or manage these presets and samples once you've downloaded them. In the end, while these may be useful for some, to me the sound packs feel like a distraction.

Reason+ also includes a few other features. First, it offers early access to new versions of Reason. But that early access for Reason 12 was terrible. It was essentially like paying to be a beta tester, so I would not recommend using that feature in the future!

Reason+ also includes the Companion App which lets you download the presets and rack extensions, as well as provides news updates. It's fine as far as this type of app goes. But it's a pain to have to have an extra piece of software (and online only login) required each time you launch Reason!

Is Reason+ a Good Value?

That really depends on how you plan on using Reason. There are a lot of users that will find Reason+ to be a great value, and a lot that will lose money subscribing to Reason+.

Does it look like Reason+ is a good deal for you?
✅ Click here to check the price of Reason+

Determining whether Reason+ is a good value is going to be a very individualized decision. It not only depends on how you chose to use Reason (and how much you've already invested in it), but also what you expect the future to bring.

That said, given the first year of Reason+ they released two Rack Extensions and a new version of Reason give some hope that it will continue to deliver consistent value to users.

While I think that Reason+ can be a great value for some folks, I have broader concerns about what Reason+ means for Reason Studios and its user base. Over the first year of Reason+, Reason+ has mostly stuck to my expectations. Reason as a standalone product is still available, but the price hike to reason 12 for new purchases and upgrades makes Reason+ the smarter choice for most users.

On the one hand, as long as Reason is still available for a standalone purchase, then adding Reason+ is great. It allows users a lot more flexibility in how they want to access the software. It also provides Reason Studios with predicable income that they can (hopefully) reinvest into product development. Or it could just create a new income stream for the private equity firm that bought Reason Studios a couple years back.

As a general rule, I think that subscription services are terrible for consumers, and keep us locked in a cycle of indebtedness. I'd rather save up, buy something outright, and own it for good. I also worry that eventually everyone will be forced to move to a subscription model, which could create issues with backwards compatibility, newer operating systems, and any number of other things.

Here is a more complete version of my Reason+ fears.

Reason+ Review Conclusion - Should You Get Reason+?

I think there is a certain group of musicians to whom I would whole-heartedly recommend Reason+ - people new to home recording software, but familiar with real instruments. For $20 a month, Reason+ lets you dip your toes in the water of home recording with limited risk. If it's not for you, no problem. Find something else. If it is, then consider whether you should buy everything separately, or continue to subscribe.

Who is Reason+ Right For?

There's also the Reason Super User. If you want to have the latest everything that Reason Studios releases, then Reason+ saves you a lot of money in the long run. Sure, you don't "own" anything at the end, but you've probably been spending hundreds of dollars a year on Reason for years already, so why stop now when you can get more value for your money?

Another group of users who may benefit a lot from Reason+ are producers who create music in another DAW. They may not need access to all of Reason's instruments or DAW all the time, but they may have a project that requires a new tone palette. Or maybe they just are looking for some inspiration. For users like this, subscribing to Reason+ for a few months a year is an incredible deal.

There's also a big group of people to whom Reason+ is terrible: the pure hobbyist. I have a friend who bought Reason 7, makes a few songs a year, and is totally happy. He actually just upgraded to Reason 11, and is now busy hunting down free VSTs. And he's still totally happy! If you're the type of musician who doesn't need the latest and greatest, then a Reason+ subscription is just throwing money away. 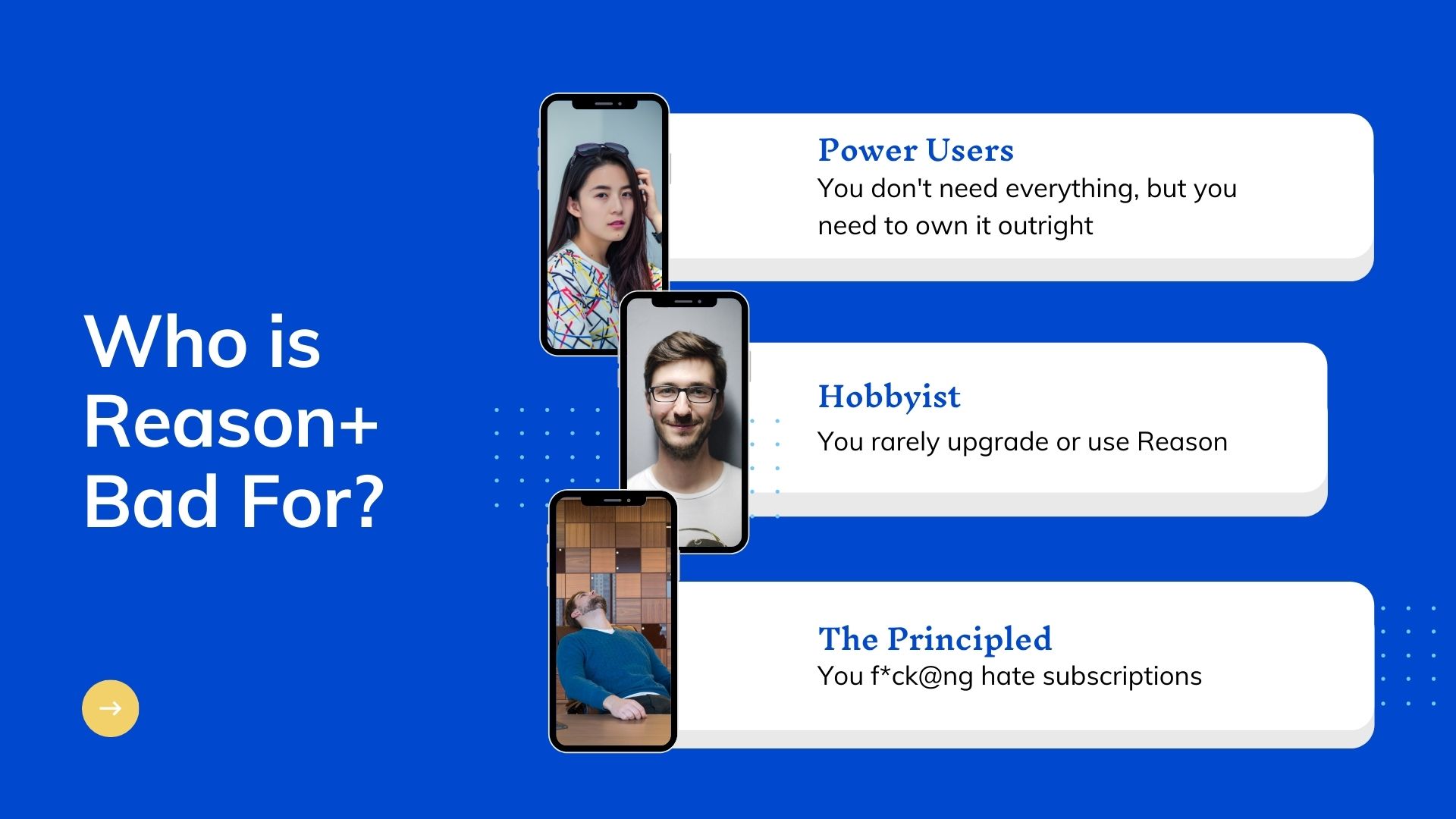 Now that Reason Studios has provided a clearer framework for Reason+, including a roadmap and over a year of running the program, my review for it would be an 8/10. For the right user, especially someone using Reason as a plugin, Reason+ is probably closer to a 9/10. For the wrong user - someone like me who has invested in a lot of Reason products (but not all of them) - Reason+ is probably closer to a 5/10. It's a good product, but not a compelling price.

And if you live in the UK, prepare for stick shock, because Reason+ is 20 pounds a month. Way too expensive!

But that's just me! Would you buy Reason+? Have you used it? What are your experiences with it? Please leave a comment below!