How Much do Artists Get Paid on Spotify? 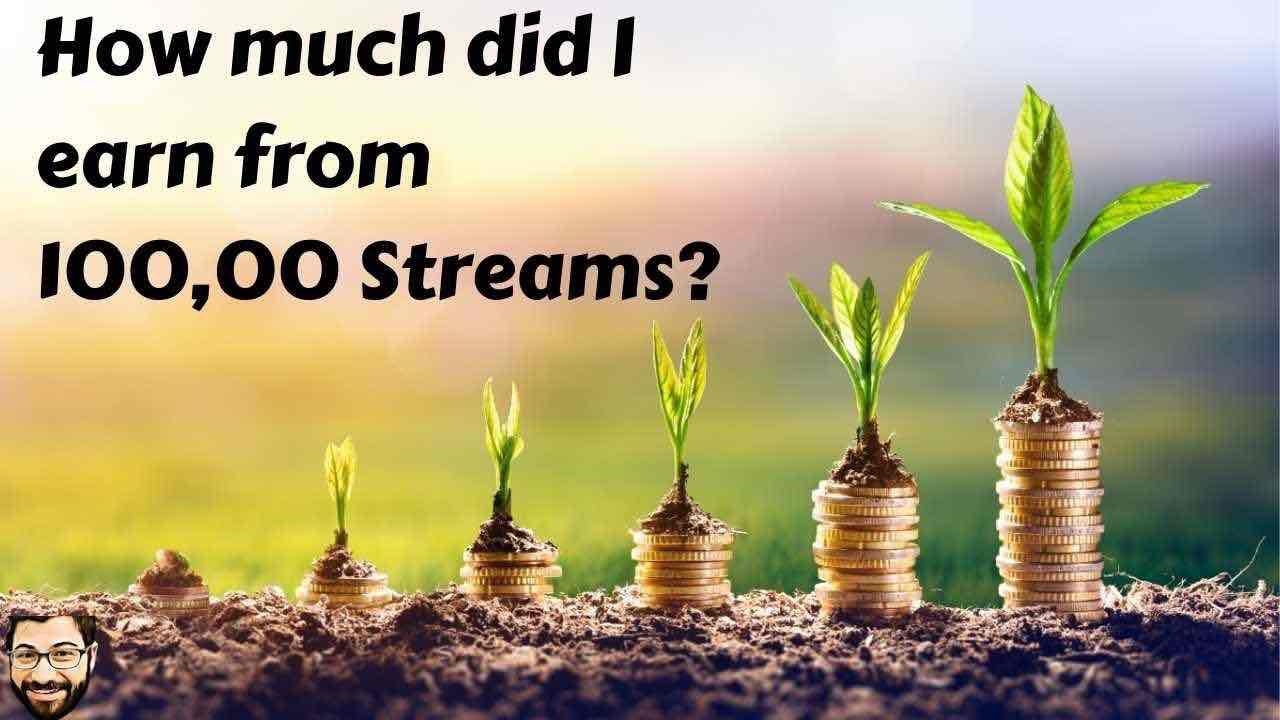 In this article I'm going to answer the question: how much do artists get paid on Spotify? This article is based both on my own experience as a musician with over 100,000 streams and on research I've conducted.

To start out, let me note that there are actually two different revenue streams you can earn money on through Spotify (we'll get into more detail in a bit). These are mechanical royalties for owning the master recording, songwriter's performance royalties (and on "non-interactive" sites like Pandora, you can also earn artist performance royalties). Both are hugely important, but it takes different steps to earn each.

If you want to estimate what you'll earn from your streams, scroll all the way to the bottom where I've added a Spotify streaming royalties calculator!

Want to get more streams, earn more money, and grow your fanbase?
✅ Check out the Top 3 books for Indie Artists looking to make a living with music!

Note: some of the links below may be affiliate links, meaning that I receive a commission if you purchase through them.

In this article, you'll also learn:

According to some people I've talked to about Spotify royalties, this is very low amount. But I think it's pretty realistic for what many bands would see releasing an album on Spotify. Let me explain why.

How to Get Your Songs on Spotify

The most common way to get your songs on Spotify is through online distributors like CD Baby and DistroKid (7% off your first year through my link).

But if you just upload your songs without doing any preparation, no one is going to listen to your music. To gain any real traction for your songs, you need to have a launch plan. I've put together a beginners guide on How to Release an Album Online that's full of tips on making your album artwork, promoting your tracks, and getting on Spotify playlists.

Alternately, if you're licensing your music, you can also elect to opt in to external distribution compilation deals. That's how I was able to get 100,000.

Let me explain how it works. I uploaded my songs to AudioSparx. I then gave them permission to allow my songs to be used for external distribution. They partnered with companies that are adept at promoting albums on Spotify. Those companies put my tracks on some of their compilation albums, which then got played a bunch.

So this was really easy money for me. All I did was check a box and they took care of the rest. And to be honest, I probably couldn't achieve 100,000 plays on my own. Even with a strong marketing plan, it would take years to build up a fan base and build relationships with playlist curators.

Not without spending lots of money on promoting my music.

What Streams Qualify for Payment?

Spotify only pay out if songs are played for longer than 30 seconds. And short songs were not eligible for playlists, previously. Thanks to a protest album of 1,000 30-second songs by the Pocket Gods, Spotify changed this rule.

Mechanical royalties are paid to the owner of the master recording. Traditionally, that would be the record label, but in this indie day and age, it could also be you.

Your digital distributor, like DistroKid, will collect these royalties for you, but the amount you earn per stream varies. For example, you earn more if a Spotify subscriber listened to the song instead of one of the free users.

Instead, the company that developed the albums took $280 and passed $100 on to AudioSparx. AudioSparx then took $60 and left me with $40. Not great. But again, I doubt I could have seen this type of success myself.

But this is actually even better than most artists signed to major labels would see, because they don't often own their masters at all. Instead, this entire revenue stream could go to the record label. Probably the contract would ensure that the band got some money, but how much? Then it would be split amongst the band members, their managers, attorneys, etc.

As the songwriter, you are entitled to a royalty every time a song you wrote is publicly performed, including when it is streamed on Spotify. This assumes that you've registered your song with a PRO like BMI or ASCAP.

What does this mean for you?

While I haven't been able to find the exact figures, my understanding is that performance royalties for Spotify are about equal to the mechanical royalties. So in this case, another $380.

Note: Performance royalties take a really long time to report, so I can't verify the results first hand yet, but I will update it when I know more.

3/2/22 Update: I spoke with my publisher, and apparently the sub-publisher/promoter of these tracks failed to register them with a PRO, so I won't be receive any performance royalties for these streams.

Then, songwriting performance royalties are split between the songwriter(s) and publisher(s). I didn't have any songwriters on my song, so I get to keep all of the songwriter's share, but AudioSparx acted as my publisher, meaning they will collect the entire publishers. So I'd expect to earn about $190 from my songwriters portion of the streams.

Essentially Spotify pays 10.5% of its income to songwriters, though there are currently proceedings underway to raise that rate. Songwriter advocates a pushing for a rate of 20%.

SoundExchange also will collect royalties on behalf of the artists who performed on recordings, but only for non-interactive streams. This means that on sites like Pandora, you will be entitled to earn royalties for your performances, whereas for sites like Spotify, you won't. In Spotify, this share is just included in the mechanical royalty stream.

How Much Does Spotify Pay Per 1,000 Streams?

Putting this all together, what does this mean? How much does Spotify pay per 1,000 streams? 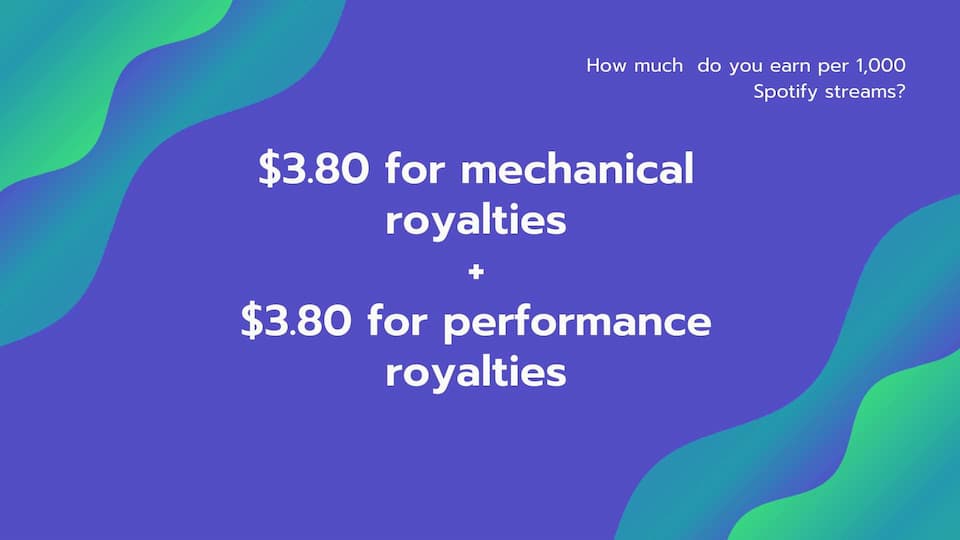 Let's look at the best case scenario. You're an independent artist who self-published an album of original music that you wrote, and you don't have any co-writers or bandmates to share with.

If you release that album directly through DistroKid and got 1,000 streams, you could expect to receive $3.80 from mechanical royalties and another $3.80 from performance royalties, earning approximately $7.60 per thousand streams. Or if you got 100,000 streams on Spotify from a self-released album, you'd earn about $760.

Do you think that's fair? Share your thoughts in the comments below.

I've included a Spotify royalty calculator below, so you can estimate how much you might get paid for your next release. Please note that these are only estimates. Also, if you've got cowriters, you'll need to split the PRO money with them. If you've got band mates, you may need to split the Spotify streaming portion with them (depending on your agreement with them).

In addition to earning money through streams, I've found that music licensing can be incredibly lucrative for earning money from your music. Here is my free guide on how to license your music.