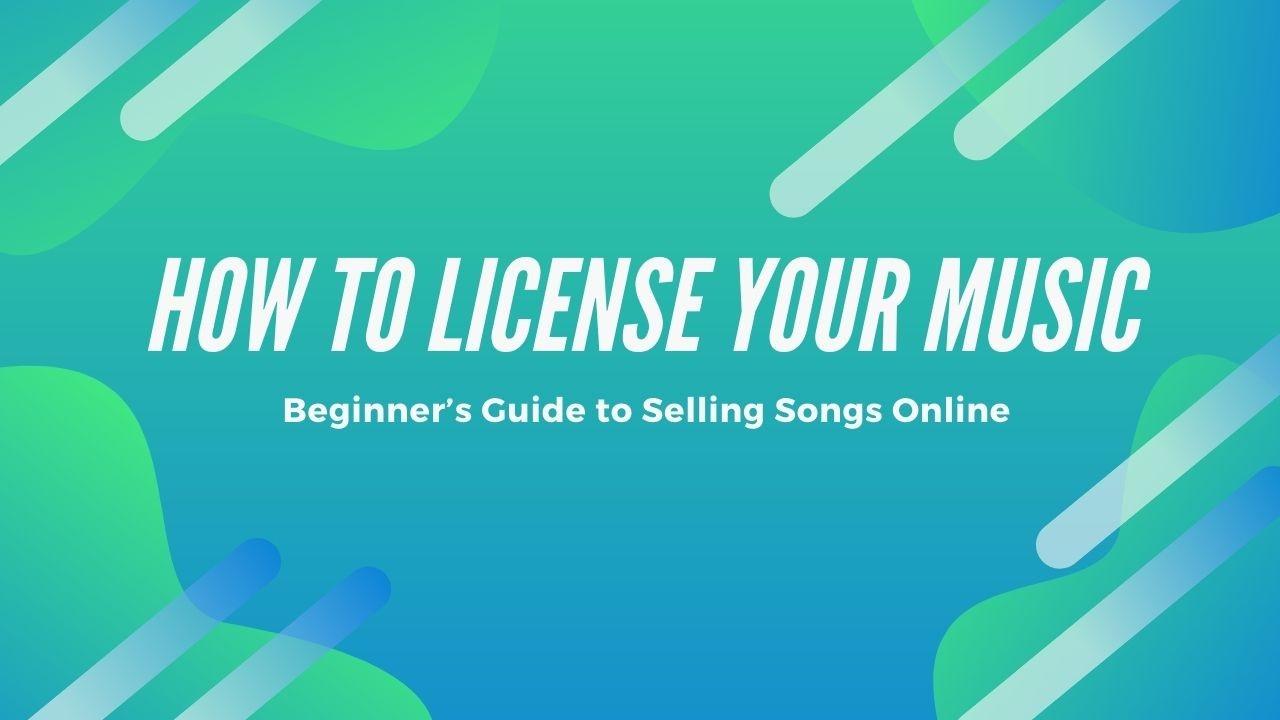 Figuring out how to license your music is much easier than you think. It’s not a “get rich quick” or a road to instant fame, but if you keep at it, you will find success.

Up until a few years ago, I didn’t have a clue where to start or what to do. I had some vague notion along the lines of

But once I figured out how to license my music, I've earned over $10,000, had placements on TV and Netflix, and just feel damn good about myself.

Don’t worry though, I’m here to show you what I’ve learned about selling royalty free music.

So let’s break out the steps of the process and build you a quick road map to get you started with stock music licensing.

These are the steps. We’ll dig into them in a moment.

That’s it! If you'd rather watch a video on the details, click here.

Licensing your music online is both easy and incredibly hard. Hundreds of books have been written about each of these topics, and I’m sure hundreds more will be written in the future.

I also plan, to write more about them, but for now, let me throw and a few tips for each, specifically as they relate to selling stock songs online.

How to Write Your Song for Music Licensing

If it’s energetic funky hip hop, then don’t mix it up with a weird interlude. This may be one of the hardest lessons to learn about how to license your music.

Second, (most) stock music the sells well is either a short 20-30 second piece of music that tells a story with an intro, body, and conclusion. Here are five tips for writing a great song intro.

How to Record Your Song

If you're focused on selling your songs, then when you record, the main thing to focus on is avoiding “distracting” sounds and performances. You want to avoid harsh resonances and feedback (unless the song calls for it). In other words, you want a nice clean performance.

Just put yourself in the shoes of a buyer – they’re probably buying production music to play in the background. You don’t need to worry that you can’t capture pristine sounds like Nigel Goodrich, you just need to be good enough to get a clear, clean recording. That way, viewers focus on the message without getting distracted by the song.

Looking at the marketplace of people selling songs, you don’t need to have a very good mix or loud mastering to successfully sell lots of stock music. But it doesn’t hurt.

With mixing, focus on getting the levels right, and cleaning up mud and harshness. If you know what you’re doing and you’re good at it, then by all means do your thing.

If you don’t have a clue how to mix, there are a lot of great resources (some free) to teach you how. Check out Youtube or The Recording Revolution. But for now, just commit to getting a little better with each song.

And you’re probably better off using compression and reverb VERY sparingly until you’ve gotten the hang of them.

When it comes to mastering, there is no secret sauce. If you’ve been working with your own track the whole time, then it should basically sound the way you want it to, in which case you should only use mastering to crank up the volume before applying a limiter.

But please don’t ruin your mix by boosting the volume too much. It’s terrible for the song, and the people that buy your stock music really don’t seem to care that much about volume. Besides, buyers can always crank up the volume further if they want!

Upload the Song and Tag it with Keywords That Sell

I recommend signing up for an account with Pond 5 for the reasons described in this post. You can’t go wrong with them, and you can always join other sites later.

From there, you’ll want to upload your first song(s) and give it a nice descriptive title.

Be sure to write a strong description & use 50 evocative keywords. This step is honestly just as important as the previous 3, because no one will find your song without a good description, title, and keywords.

For the keywords, you’ll want to use a solid mix of terms that describe the tone of the song, who it sounds like, what its technical details are, any unusual instruments used, and how it might be used, but not in a narrative way.

I don’t have evidence that using social media directly boosts sales, but in my own experience I have seen a strong correlation between when I started adding social media to my toolset and when my sales reached a new peak.

And a lot of stock music musicians more successful than me use it, so it must be helpful (if nothing else, it boosts the odds that your song will rank in external search engines).

I would recommend using three platforms to start.

Twitter, Soundcloud, and on your own webpage (not technically social media, I know).

By tracking how many clicks my links receive, I know that this website drives a fair number of visitors to my stock music on Pond 5 (though I can’t track whether they buy my music online). However, a website is still give you a static base of operations from which to promote and highlight your songs, and is something that people are more likely to encounter through a Google search.

Closing thoughts on how to license your music

So there you have it. Each of these previous steps is very difficult to perfect, but incredibly easy to start.

And a little better promoted.

If you really want to learn how to license your music, check out this free course!

I'll show you how to license your first song in just five days in the free mini course. In it you'll learn: the best library for beginners, how write licensable songs, and how to make sure your songs get found!