What Does Royalty Free Music Mean? 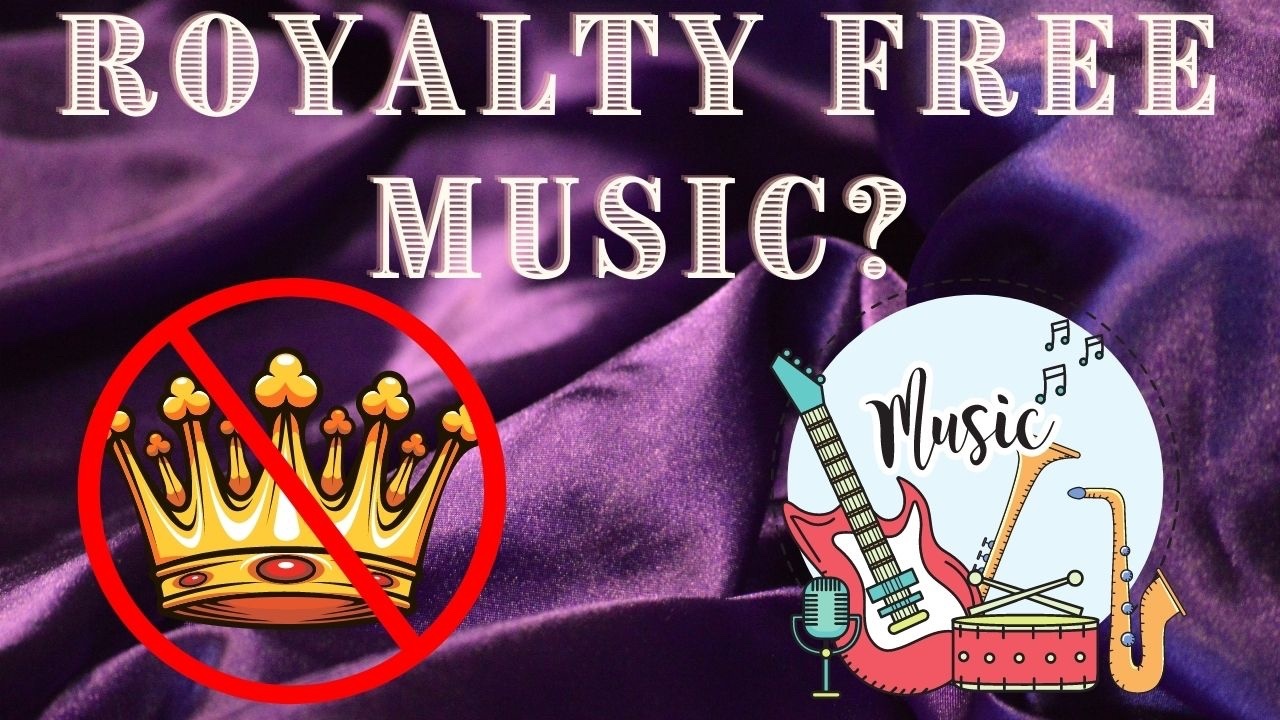 We often hear the term “royalty-free” thrown around, though many of us don’t know what it means. It’s understandable. The world of music licensing is unnecessarily complicated, which is why so many people end up getting in trouble for using music they don’t have the right to use.

Today, we’re going to dissect the meaning of royalty-free music in the realm of music licensing and talk about the different types of royalties someone can earn from a piece of music.

In its most basic form, a music license is a license or right held by an individual, allowing them to use and/or distribute a piece of copyrighted music. People license music for many reasons, though most often, they will license it to use in movies, television shows, commercials, and online videos.

Even if someone is using a piece of music for a personal creative project that they want to put out to the rest of the world, they must obtain the correct license to do so. The only exception to this rule is if they use royalty-free music.

The question is, what is royalty-free music, and where can one find it?

What Does Royalty-Free Music Mean?

Contrary to popular belief, royalty-free music is not free, nor is it music that you own the rights to. “Royalty-free” means the person who uses the music for their project, whether for a movie or a YouTube makeup tutorial, does not have to pay a royalty to the song’s owner.

The copyright belongs to the person that owns the song. They still have to give you permission if you want to use their piece of music in one of your projects.

When a person uses royalty-free music, they have to pay a one-time license to use it for that particular project. One paid for, they can use the piece of music for as long as they want.

Royalty-free music comes in all shapes and sizes, from country to classical to heavy metal. Like regular music, some of it sucks, and some of it is incredible! It really depends on where you find it. Luckily, there are many high-end music sites out these days that provide easy access to royalty-free music.

What About Copyright Free Music?

People often get the terms “copyright-free” and “royalty-free” mixed up. Anyone who creates a piece of music automatically has the copyright for it, so we’re not totally sure that copyright-free really exists. Even if a copyright owner says, “I don’t care, anyone can use my music,” they’re technically giving everyone the “right to copy” their music.

The real meaning of copyright-free music may be closer to the idea that a number of years after the death of the songwriter (the number has changed several times), the copyright expires, and the song becomes part of the "public domain." For these songs, anyone can use the song for any purpose without paying anything.

But most music that people want to use in YouTube videos and podcasts is not old fashioned classical and jazz. They want modern sounding music, and so they need to purchase the right to use it from a royalty free library, like Pond 5 (affiliate link).

It's also worth noting that the copyright to the sound recording and the written song are two DIFFERENT copyrights. And while one might be in the public domain, the other might not.

For example, if you want to use my recording of a version of Beethoven's 5th, you still need my permission because I control the recording, even though Beethoven's song is in the public domain. In the United States, right now any song recording made before 1926 is in the public domain, and is, therefore, royalty free. However, the underlying song might still be copyrighted by the songwriter and their publisher. 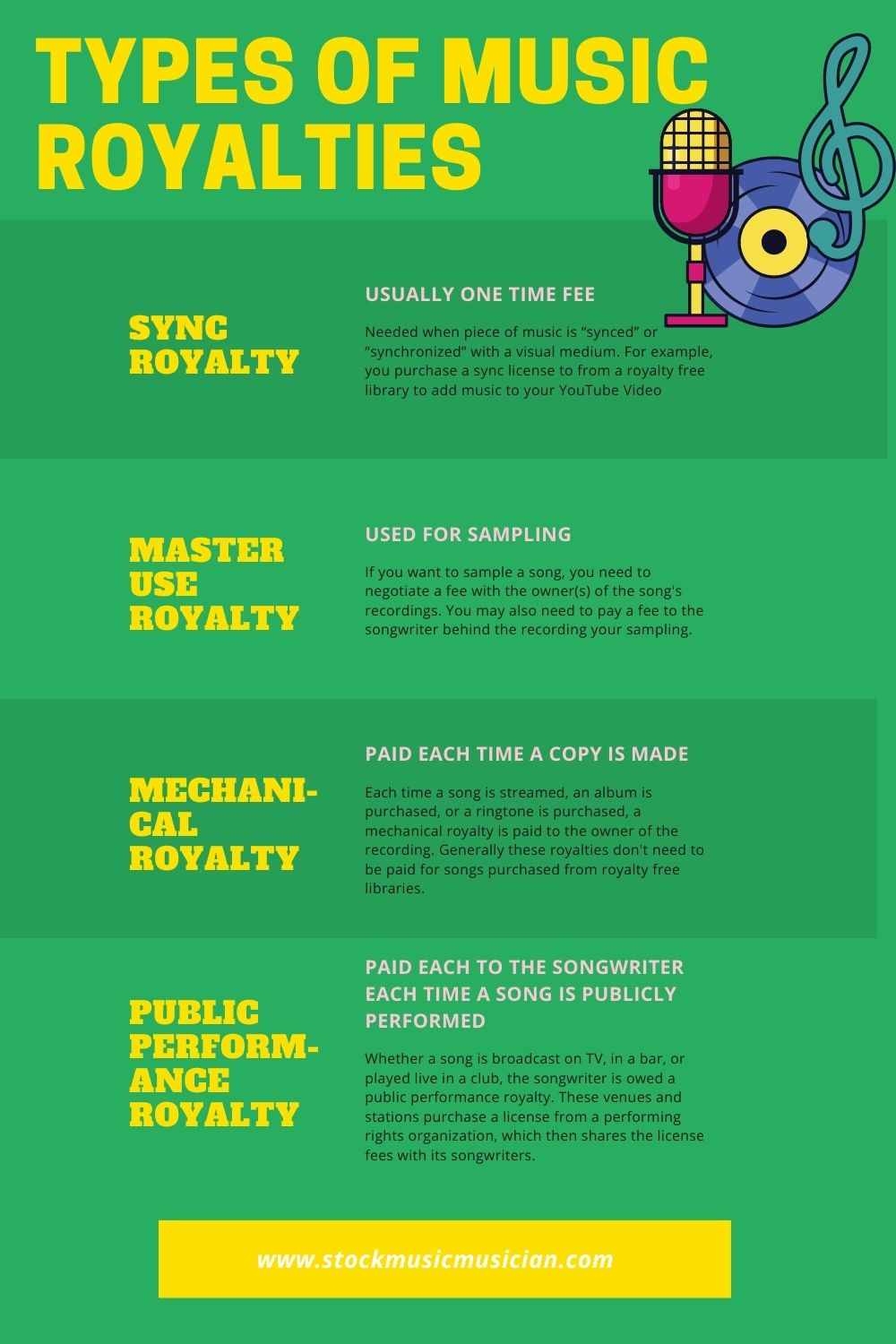 When we talk about royalty free music, it helps to be clear which royalties the music is "free" from. You may be surprised to find that a record song actually results in multiple royalty streams, which will talk about below.

We generate sync royalties from copyrighted music whenever that piece of music is “synced” or “synchronized” with a visual medium. These royalties can be generated when a copyrighted song is used in a commercial, video game, trailer, or movie.

For example, if a music publisher is scrolling through YouTube and they find a song that they own streaming on a video, they can claim a sync license and opt for video monetization to collect sync royalties from it. YouTube will then have to attach advertisements to the video to generate royalty revenue to pay out to the music publisher.

The same thing goes for large studios, such as Disney, CNN, or ESPN. These networks can purchase a sync license from a copyright holder to use a piece of music in a promo or commercial. That sync license payout will typically be paid to the publisher and the creator(s).

When done properly, a sync royalty is only paid once. So when you purchase a song from a site like Pond 5, you pay the sync fee to Pond 5, which passes a portion on to the song owner. Depending on how you use the song, the sync fee may be the only royalty that you to pay.

A master use license is a license between the sound recording owner (who potentially owns the compositional rights as well) and the producer/creator of the new creative work in which the sound will be used.

With that said, it is common for several parties to split ownership for single sound recordings, meaning you’ll have to get the approval for all parties to use the particular master recording you’re after. A master use license will also often cover the scope in which the producer/creator will use the sound recording, including whether or not they’re planning on performing it in public, what kinds of credits the sound recording owners will receive, etc.

As you can see, sampling a hit song quickly becomes expensive and is incredibly time consuming to do properly. That's why we recommend using royalty free samples in your compositions instead. Here is a list of the best sites for free loops and samples.

A mechanical license is a license that grants a user the right to reproduce and distribute copyrighted musical compositions on records, tapes, CDs, ringtones, permanent digital downloads, interactive streams, and any other relevant digital configurations. The user must pay a statutory rate to the copyright owner to obtain this license, and that statutory rate will be paid for every “reproduction.”

The term “mechanical” comes from the days of 19th-century player pianos, which performed popular songs that were transcribed onto large piano rolls. Once songwriters took note of the player piano’s popularity, they began demanding royalties for every copy of their music made.

Under current copyright law in the United States, the mechanical royalty rate for a composition that is five minutes or less in length is 9.1 cents. For every song over five minutes, the rate is $1.75 cents per minute over five.

For licensing purposes, the mechanical license is usually where the "royalty free" part comes in. You are generally purchasing a royalty free license that allows you to make unlimited copies of the recording.

If you ever perform a song in public that you have not written, or if you play recorded music at a venue such as a restaurant, bar, club, or concert venue, you will need a public performance license. The same thing goes if you are playing music that you do not own on the radio or through a streaming service.

While this may sound impossible, the good thing is that public performance licenses are often granted to businesses, venues, institutions, and radio stations. They typically get blanket licenses as well, allowing them to play almost any song they please, as well as have others come in and perform songs.

Performing Rights Organizations (PROs) collect from these public performance licenses and distribute them to their rightful owners. The four major PROs in the United States include BMI, ASCAP, SESAC, and GMR.

Let's say you purchase a license to use a song from a royalty free site like Pond 5 and use it in a TV Show on NBC. You will only pay a sync fee to Pond 5. Separately, NBC has an agreement with all of the PROs, and they will pay a performance royalty to the PRO which will then go to the songwriter.

Frankly, I hate the term royalty free music. It is not helpful at all. But it's better than the term "copyright free" music. That's especially because it means different things to different royalty free libraries. That's why I recommend finding one royalty free music library you like, learn what "royalty free" means for their licenses, and just keep using them. Pond 5 is my go to for selling my music, and for purchasing music to use in my YouTube videos.

Essentially, if you want to get quality music and protect yourself from lawsuits, you should buy royalty free music and just pay a sync fee (usually starting around $15). Not only is it easy for you (and protects you), but its totally hassle free, and makes sure the artist gets fairly compensated.

Imagine being in the position where you use a song without permission in a YouTube video and that video goes viral. A huge chunk of your profits would end up going to the artist instead of you. However, if you'd purchased a royalty free license, you would likely only pay $15-25 and you'd be entitled to all of the upside. And you could use that same song in multiple videos.