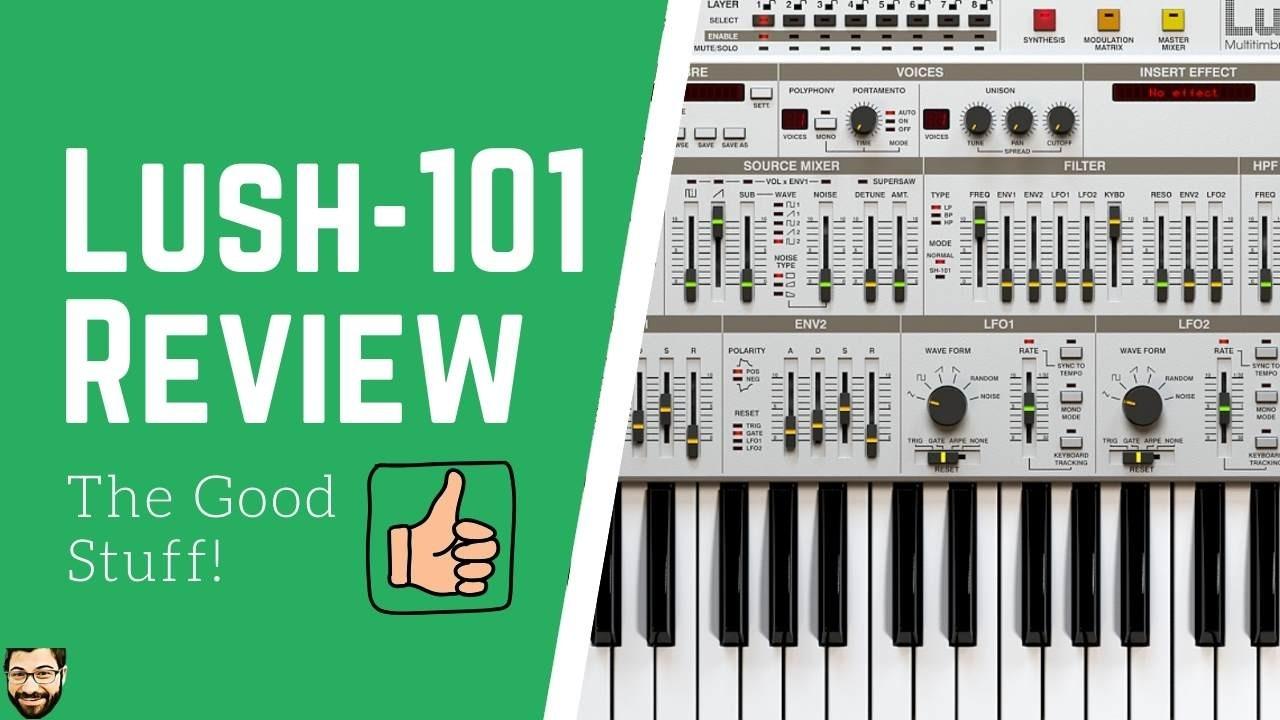 I haven’t had this much fun with a new synth in a long time. The D16 Group’s approach to the legendary Roland SH-101 has left me with a huge smile on my face and a desire to slap it on all my songs. The Lush-101 is more than just a retread of a classic synth, though. It adds a ton of cool features that make it usable in a huge variety of songs, from classic EDM sounds to ambient.

The Lush-101 sounds like an authentic analog synthesizer, and makes you want to keep playing. But that doesn’t limit it to any particular use. It makes great pads. Leads, keys, and basses. In fact, it sounds so good that the first song I finished using it was accepted by a music licensing library I had been trying to work with for several months! 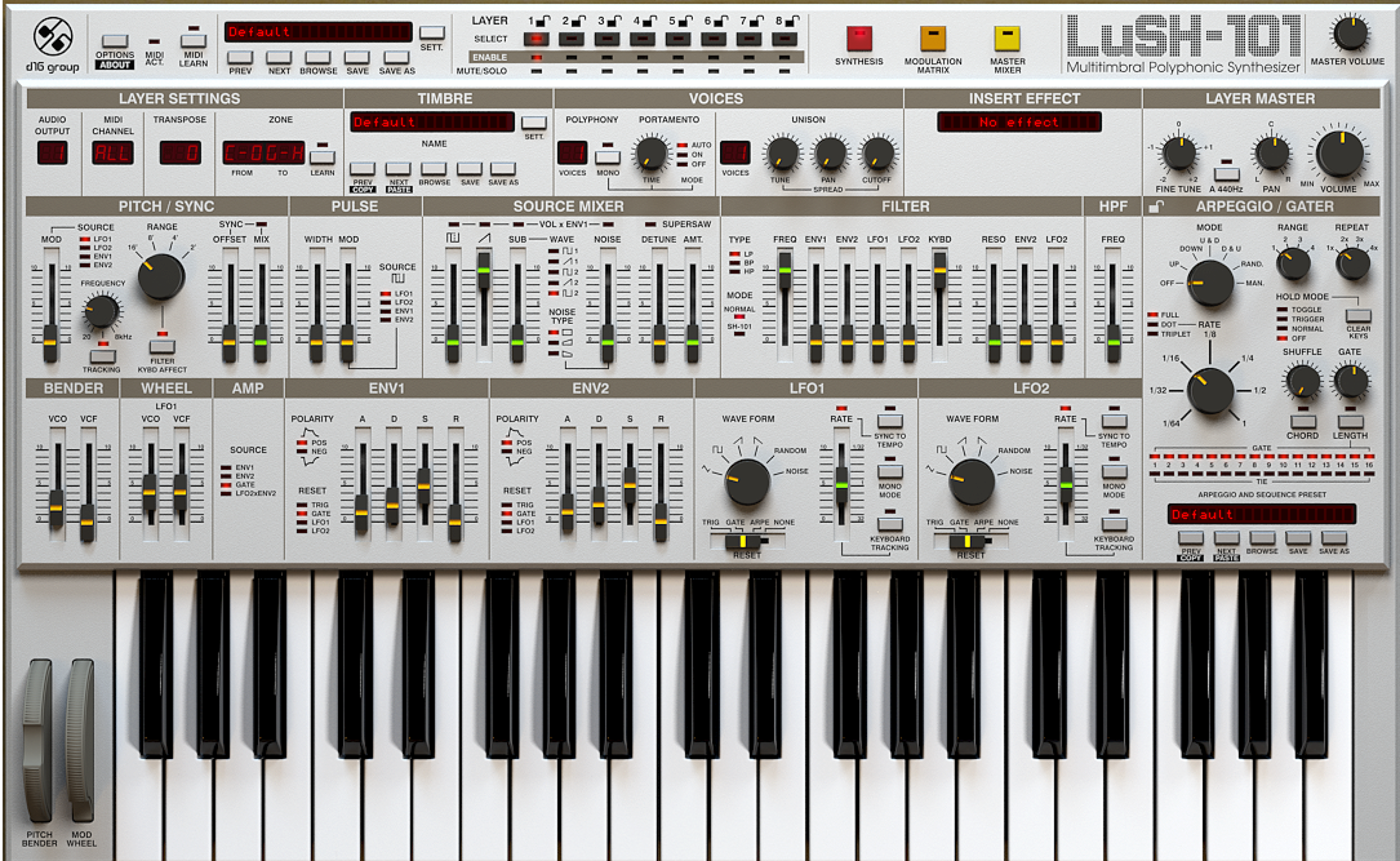 In this review, you’ll find out how to get up and running with the Lush-101, uncover some of its killer features, and get to hear demos of the Lush-101 at work.

Note: this article is based on a review copy of Lush-101 provided by D16. This article may include affiliate links.

The Lush-101 might look intimidating to those new to synths, but it's actually pretty straightforward. After taking a moment to get it setup right, you'll be in business.

Getting started with Lush-101 is pretty straightforward, just like any other VST library I’ve used. But with a couple of things you should be aware of. First of all, by default the Lush-101 is not setup to take advantage of your computer’s multi-core processing. And so it might seem like the Lush-101 has terrible performance. But don’t worry. Just follow these steps to setup multi-core processing on the Lush-101 and you’ll be in business. I've been able to run a half dozen instances of Lush-101, plus a bunch of other plugins, without trouble.

Lush-101 also didn’t show up in my plugin list in Logic Pro X until I reset my computer. It runs great in Logic, and really well within Reason too.

From there, though, Lush-101 is a pretty straightforward synth. It basically replicates the controls of the SH-101, but it adds three different interfaces to unlock a whole new world of power.

Along the top of the instrument you have the options button, the ability to load presets, and the buttons that let you choose between the 3 interface modes: synthesis, modulation matrix, and the mixer. You can also select different layers for editing or mute them. The master volume is also at the top, and I’d recommend turning it down! While the Lush-101 presets sound incredible, they all tend to run a little hot.

The next row includes more general tweaks to the active layer, like running and polyphony (or monophony). It also includes a really great sounding unison feature. You can also add individual effects, from chorus, flanger, string ensemble and phasers, to vowel filters, tremolos, distortion and decimation.

The next row includes the pulse wave oscillators and a pretty traditional SH-101 approach to tweaking your sound. This row also includes the powerful filtering tools, which can be modulated by just about every other parameter on the Lush-101.

Finally, on the bottom row, you’ll find two envelopes and two LFOs, which can be direct to control (and be controlled) by a whole host of features.

The modulation matrix is one of the key features of the Lush-101, and it lets you create incredibly complex, evolving sounds. It allows you to have one parameter control another, in ways that the default layout wouldn’t normally allows. For example, you could have the pitch bend control also effect the tremolo depth. 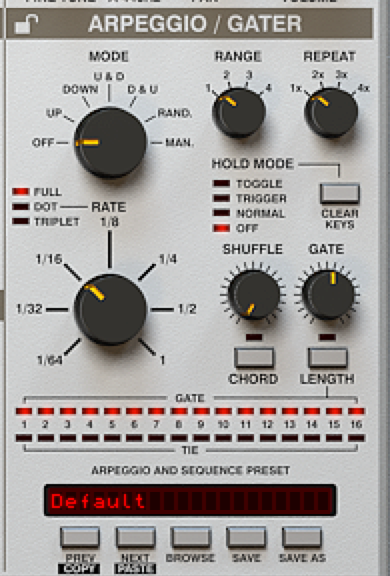 The synth also includes a gater/arpeggiator loaded with tons of classic and modern preset patterns. Or you can create your own on the fly. This can also be used in chord mode for even more power.

In all seriousness, the Lush-101 comes with the most usable set of presets I’ve ever encountered in a synth. Literally every preset I load inspires me to write a song. And they fit together so well that you’d be hard pressed not to start layering presets on top of each other.

The Lush-101 presets are organized by type - I.e. bass, poly, pads, etc. It makes it really easy to find what you’re looking for quickly. And on top of that, you can rate each preset from 1 to 5 stars, so you can quickly find your favorites!

And if that's not enough, you can buy an expanded preset collection.

The Lush-101 excels at creating larger than life sounds. The ability to layer 8 instances of the synthesizer is one of the things that makes the Lush-101 so powerful and unique for sound design. You can combine arpeggiated parts with pads to create beautiful drones, or layer multiple bass synths together to shake the room.

On top of the ability to layer and tweak each of the 8 layers, the Lush-101 includes a powerful mixer with built-in levels, pan, EQ and compression. This lets you mix each instrument together flawless. But it doesn’t stop there. In addition to per layer effects like distortion and filtering, the mixer includes three send effects for reverb, delay and chorus.

But wait, there’s more! You can also assign different layers to different zones of the keyboard. So you could have basses down low and leads up high. And for CPU efficiency, each layer can be controlled by a different midi controller!

That said, the Lush-101 typically sells for at least twice as much as the Tal. Nonetheless, I think the Lush-101 is worth the extra money, and I’d recommend it over the Tal.

The Lush-101 is one of the best synths I’ve used in a long time, up there with Massive X. While it isn’t as versatile as some synths, it sounds incredible, and at least one instance of it would probably fit in almost any track. Once you start experimenting with the included patches, you’ll be tempted to start making song after song. But take a moment to savor the delicious sounds!