How to Compress Strings 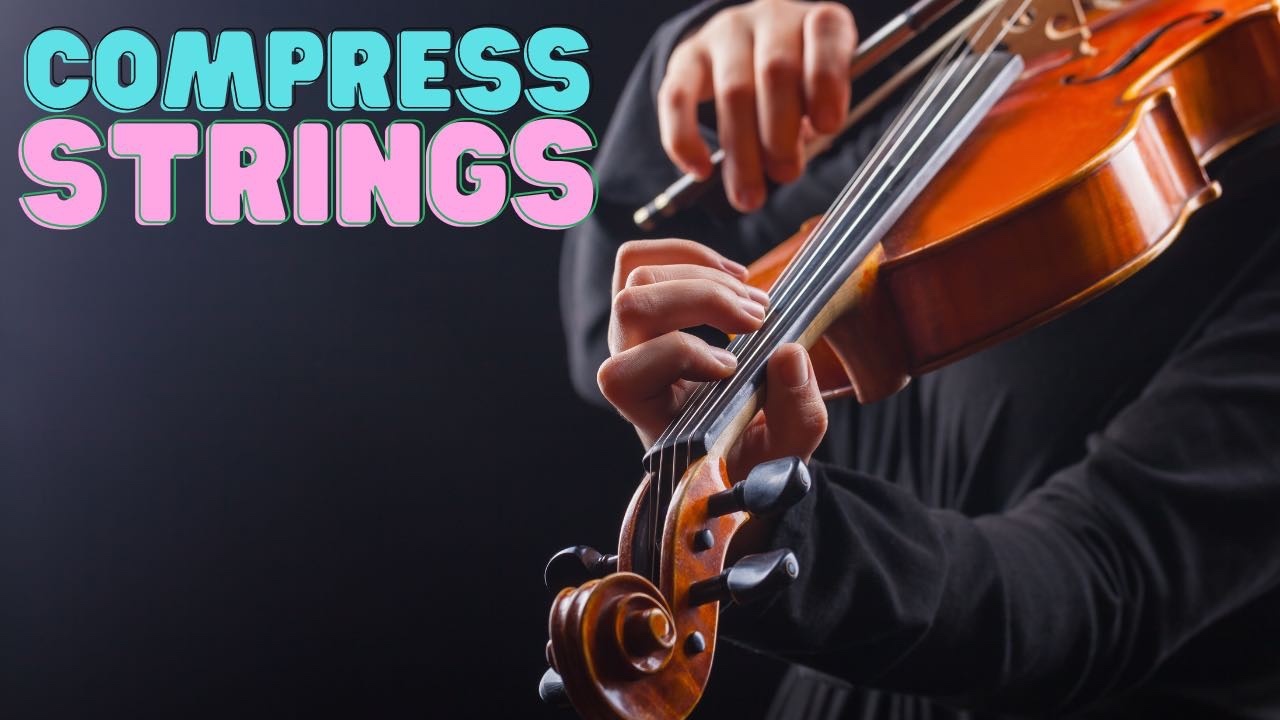 Whether you're looking for soaring legato violin parts, powerful pizzicato cellos, or just want a mellow string section to sit in the background, compression is the key to getting your strings to sit perfectly in the mix. In this article I'll walk you through how to compress strings. You'll also learn some of the best compression settings for each type of string.

And if you want your strings to really stand out, be sure to check out this article on How to EQ Strings!

The beauty of strings, especially in classical music, is that they are ultra-dynamic. The push and pull of a string arrangement are what draws a listener in. When you heavily compress strings, you take the dynamics away, effectively reducing their most interesting characteristic.

Of course, there are certainly pop tracks with orchestral strings that are squashed, though this is usually because they aren’t a focal point of the mix.

The true challenge in compressing strings is retaining the natural sound of the instruments and the room they were recorded in, while still providing a modern listening experience.

If you're having a lot of trouble with your strings sitting properly in the mix, you may want to consider manually adjusting the volume of the strings using the fader on your mix. This will let you more accurately maintain the dynamics of the strings while still providing you some control over how up-front the strings feel.

Another option is to use a handy if you don’t want to spend hours automating string tracks is to check out Outlaw by W.A. Production. This gain-riding plugin listens to your incoming vocals and compensates for any changes in volume automatically. In many ways, it works like a robotic mixing desk, moving the “fader” as an engineer would.

After you've automated the volume you can then apply a gentle amount compression, getting the bests results possible. The hybrid approach is what I'd recommend most of the time. But if you're mixing an in-your-face hip hop or pop song were the strings are really in the background, you can just use compression.

Violin is a very delicate instrument. One of the biggest mistakes I see new mixers make is compressing the violin too hard, taking away its best characteristics. The only reason I’d ever compress violin is if I needed absolute control and my fader riding wasn’t cutting it. A solo violin over a pop or rock mix is a great example of this.

A cello is a much larger instrument than a violin, with tons of natural low resonance. The way in which I approach cello compression typically depends on its role in the track. If it’s tucked away with other strings or playing the role of a pad, I’ll use subtle compression, similar to the settings used on violin.

However, if it’s upfront and playing the role of the bass, I’ll use a more heavy-handed approach with slightly more compression (4-6dB) and a higher ratio of 3:1 to 4:1. If you’re struggling with getting the low-end of your cello to sit properly, I recommend using a multi-band compressor like the FabFilter Pro-MB to lock in any problematic regions (typically between 80Hz and 200Hz). Click here to learn more about how to use multi-band compression.

Viola gets treated the same as violin most of the time due to its similar delicacy. If I need to compress viola, I usually go for a 2:1 to 3:1 ratio with a fairly slow attack and release. I usually try never to compress more than 3dB. If I find that I need more control over the dynamics of my viola, I’ll opt for riding the fader instead.

When it comes to compressing string sections, I’ll typically take a subtle approach. Again, the dynamics of string sections is one of their best qualities. If you really need dynamic control or an added bit of modern character, I recommend using a 2:1 ratio with no more than 3dB of gain reduction.

The attack and release can also be fairly slow. Only try to compress the parts of your string section that stick out in a poor way. Usually an LA-2A style compressor will be the best choice for this type of gentle control, providing a touch of warmth to help the strings come to life.

One of the main reasons I’d ever approach compression differently with strings is if they were pizzicato strings instead of legato. Once in a while, pizzicato strings have transients that are too strong, poking out in the mix and causing problems with the dynamics.

If I ever need to push pizzicato strings back in a mix, I’ll use a faster attack time to mellow out the transient. Lower your threshold so you’re compressing a decent amount, start with your attack at 1ms, and slowly dial the attack time back until you get enough transient in your mix.

When it comes to controlling these faster types of dynamics, I recommend an 1176-style compressor because of it's ability to quickly control the sound while adding just a touch of bite to compensate.

The amount of compression I use often relates to the style of the song. In a pop song, for example, the strings need to sit in place, so I’ll use more heavy-handed compression, anywhere from 3-5dB.