Should You Compress Reverb? 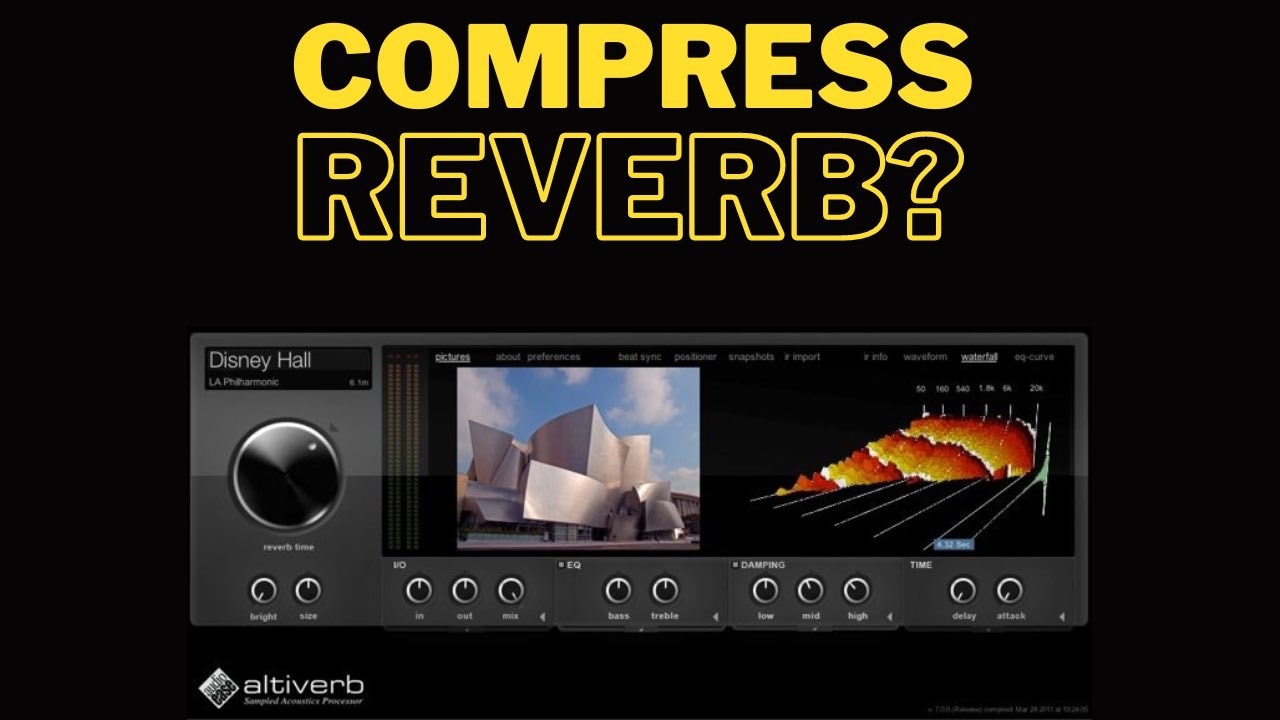 One of the biggest debates in music production is whether you should compress reverb. And the most common answer is "there's no rules in music."

But that's not very helpful.

So in this article, I'm going to tell you - yes, you can compress reverb! But it has a very specific sound. So you should be sure to do so intentionally!

Should You Compress Reverb?

In the context of mixing, reverb is generally used as a send effect. It's purpose is mostly to give a bit more space and air to the mix, as well as to push sounds forward or back in the mix.

Note: if you want to learn all about how to master the use of reverb, I highly recommend the book "The 3 Space Reverb Framework" by Nathan Nyquist (affiliate link).

What this means is that most of the instruments you'll be sending to a reverb have already been compressed, so further compression isn't really needed.

Because the dynamics of the instruments will already be controlled. That means the reverb can just do its thing and create a more natural vibe for the track.

That's generally the sound most producers are looking for, most of the time.

When Should you Compress Reverb?

Most of the time, reverb should be uncompressed. However, there are 3 situations where reaching for a compressor to help with your reverb is a great idea.

These choices are also based on where the compressor is located in relation to the reverb.

By the way, if you're looking to upgrade the sound of your reverbs, here are my favorite reverb plugins.

Should you Put a Compressor Before the Reverb?

Compression before the reverb will result in a smooth, controlled sound, but will leave the reverb tone itself unprocessed and natural.

As noted earlier, this step can often be skipped if you're using reverb as a send effect, because most of the instruments will likely already have compression on them before they reach the compressor. In that case, it would be redundant 95% of the time to add another compressor right before the reverb. In fact, that additional compressor could really squeeze the life out of the sound, creating a deadened reverb.

But if no compression has been applied to the instruments before reverb, feel free to add a few dBs of compression with a fast attack time and a medium release to control the transients. That way the reverb won't sound purely like echoes of the loudest bits.

Should You Place a Compressor After Reverb?

A compressor placed after the reverb will result in a change of the tone of the reverb itself. Essentially, a reverb will make the loudest parts of the reverb quieter and the quietest parts relatively louder. This will bring out a lot of the detail in the reverb, which can create a really cool and atmospheric effect.

But it is not a "natural" sound.

If you're looking for a specific vibe, you can try experimenting with reverb before the compressor. But if you're making a traditional rock/hip-hop/pop/folk/jazz/acoustic song, it's not worth your time experimenting with.

And when the vocals are fading out, the volume comes up, creating a pleasant reverb tail.

When you're sidechaining a reverb, you should experiment placing the compressor before and after the reverb. Both can sound good, since the effect itself is a little unnatural, but extremely pleasant.

There is a good argument for placing the compressor last since it will give you more control over the dynamics, and also because it mainly the tails that the compressor will make audible.

About 98% of the time, I’ll place a compressor before my reverb, as I like to control the sound of the instrument going into the reverb. The only time I’ll ever add compression after my reverb is if I want to make the tail sound larger. You can do this by setting the ratio a bit higher, anywhere from 6:1 to 8:1, with a slow release.

This allows the tail of your reverb to fill up the space with added sustain. It’s one of my favorite tricks for sparse mixes that need a bit more atmosphere.